Should Kids Be Obliged To Give Allowance To Their Parents

The age-old question of children paying their parents back once they reach adulthood and start working on their own is truly Asian in kind. We never really hear about parents demanding a fee from their kids when they reach an age of maturity in the West, But then again, neither do we see parents kicking their children out from their homes once they reach adulthood in Singapore. This question will probably not cease to be asked, with a newspaper article even coming out just last month about a mother that had to go to court just to get her kids to pay her money.

The question of whether kids should be obliged to give allowance to their parents remains one that is entrenched deeply into Asian tradition and customs of how love is being expressed. Back in the olden days of China, material presentation was necessary in order to express one’s goodwill in multiple situations. These ranges from love, kindness, care and even compassion. The extent to which this idea of “payback” has been deeply ingrained in the Chinese culture and is seen as an obligation, especially to children as a form of filial piety to their parents.

As the Chinese quote 饮水思源 goes, one should always pay tribute to their roots and never forget the help or benefits that they have received. However, as society evolved, so has the meaning of this, especially in a monetary sense. It is now even binding by law for children to provide an allowance to their parents should their parents not be able to fend for themselves. But the thing is, does providing monetary assistance equivalate to filial piety these days? Not exactly. 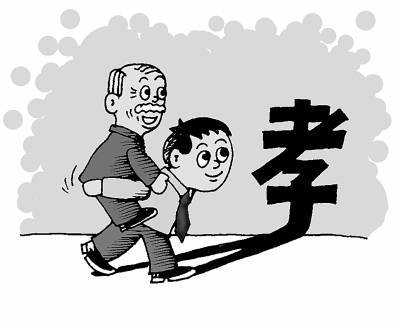 In a world that is increasingly becoming busier by the day, can money actually solve everything? What if money was really a cover-up for parents wanting their kids to just spend more time with them. Think about it, parents take care of their kids from the day they were born, spending a majority of their time showering their kids with love and affection. That is until the kid matures and decides that spending time with their parents isn’t cool once they enter high school. And just when they reach an age where they can truly appreciate their parents, they find themselves bombarded with so many other things in life such as relationships and work.

Putting that aside, it does seem only ethical to be giving your parents a portion of your salary every month, seeing that they sacrificed so much more just to raise you. Unless your parents are really in dire need of money, perhaps what your parents really mean when they ask you for money every month is simply to spend more time with them. The money is simply a way to mask their discomfort and directness when they simply want to spend time together. The ultimate question, however, of whether or not kids should be obliged to give money to their parents would then be – Yes, they should, but it is not an excuse to neglect your parents in exchange for money.